ResourceBank is delighted to to be sponsoring the annual ResourceBank Shropshire cricket challenge which is taking place on 7th July 2016 at the Wrekin College, Shropshire .

The cricket match is one of the best regarded networking events for the Shropshire business community and the hospitality tent has already completely sold out – all 700 seats already taken.   The challenge event pitches the Shropshire XI against a star-studded Invitational XI.  In 2015 the Invitation XI beat the Shropshire Cricket Club team by 71 runs featuring a thrilling century from Indian opener Wasim Jaffer.

The match is a 40 over overs per side and is the showpiece of Shropshire’s hugely popular annual hospitality event.  While all the hospitality tickets have been sold, members of the public are also welcome to watch the match which starts at Wrekin College at 11am with admission free.

In addition to being an excellent networking event, the ResourceBank cricket challenge raises funds for the County Cricket Club as well as a nominated charity. 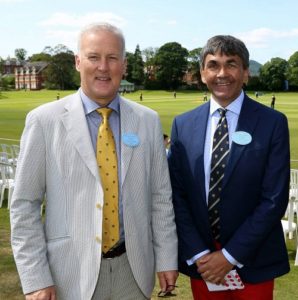 “Since the inaugural ResourceBank Challenge 2006, the annual event has grown in popularity year on year.  Last year there was a fabulous atmosphere, the cricket was terrific and everyone thoroughly enjoyed the lunch and entertainment.

We raised £3,400 for the new Wrekin Business School which will create an environment in which pupils can add a practical business component to complement their academic studies.

I am looking forward to seeing everybody on the 7th July and hope that this year we can raise even more money for a good cause.”

You can view the photos from the 2015 event on the ResourceBank facebook page.